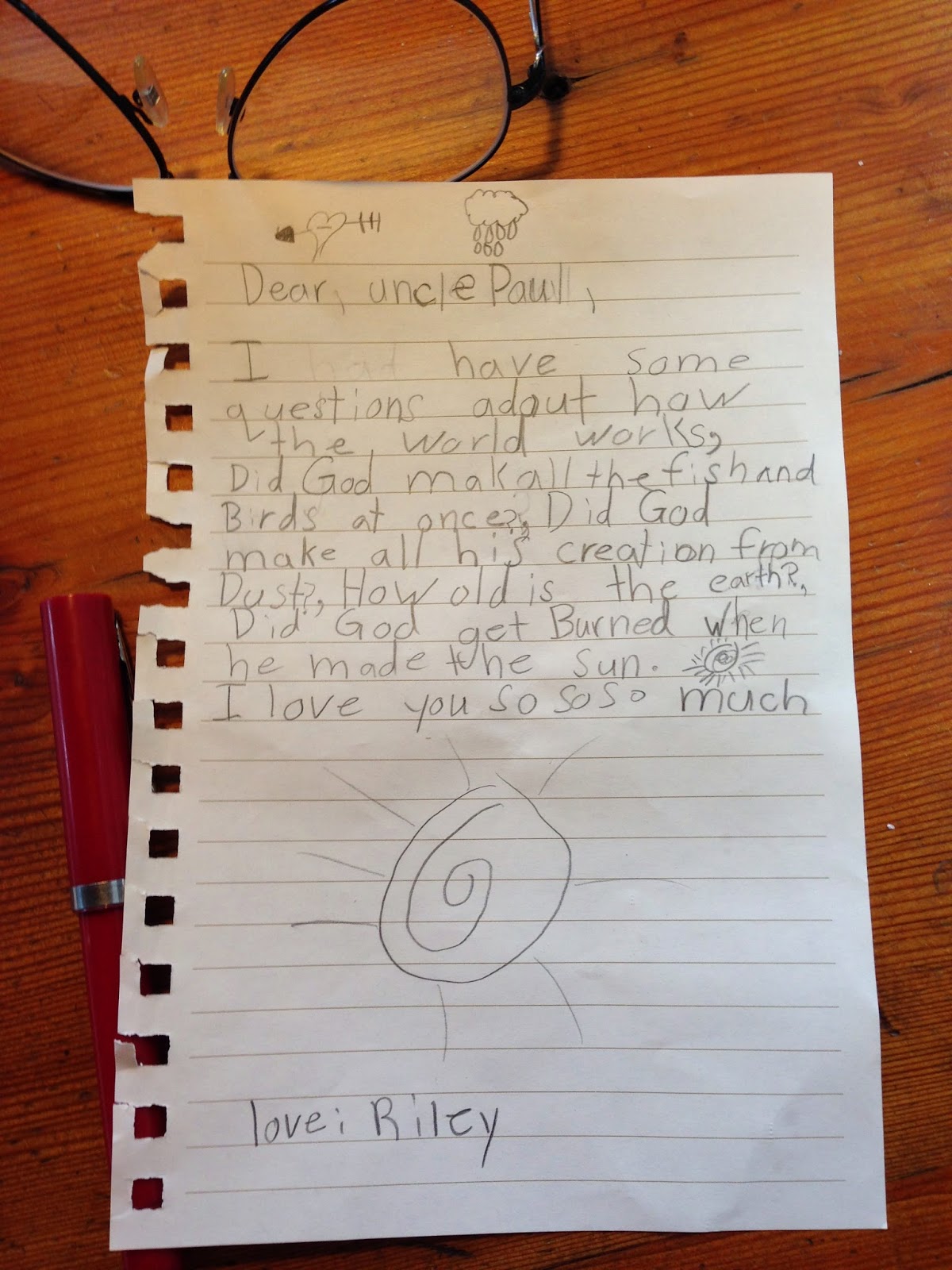 Your first question, “Did God make all the fish and the Birds at once?” is a very good one. And if it weren’t for the last two words of it, it would be an easy one, too. Yes, God made all the fish and the birds (and everything else) – of course! – but did he make them at once? Hmm, maybe. Maybe God made everything quickly, like in a few days, but I think it’s more likely that he took a very, very long time. For you and I, it seems silly to take a long time to do something that we could’ve done quickly, but God is not impatient like us – in fact, it seems to me that God likes to take his time.

Your second question is: “Did God make all his creation from Dust?” Yes, that might be a good way to think of it. Of course, he made the dust, too. And he made whatever dust is made from. And he made whatever that stuff is made from, and also what it’s made from, and so on down to things so small that we can’t even see them anymore. (If you like, we can borrow Joe’s microscope next time you visit and look at all of the little bits inside a piece of dust.) I believe God made everything, from the very biggest things like planets and stars to the very smallest things like whatever is inside dust, and I believe he made it all out of nothing. I know that sounds impossible – making something out of nothing! – but God is able to do impossible things.
I think the reason the Bible says we’re made from dust is so we remember that all creatures – including you and I – we all depend on God at every moment: without his love and energy, we’d be like lifeless dust.

You also asked, “How old is the earth?” My best answer is: I don’t know. But I have a friend who studied physics and geology after high school, and she is very smart (like you). If you want, I could ask her how old she thinks the earth is. Or, if you’re in a rush, I could google it (ha-ha, LOL, jk.) But I can say this, Riley: people who think the earth is only a few thousand years old because they think that’s what the Bible says are kinda messy bible-readers, IMO. They’re very nice people – most of them – but nice people can make messy mistakes (for example, your dad: he’s very nice but sometimes smells stinky).
Imagine throwing rocks into the lake with some of your friends near Grandma and Grandpa’s house. Imagine that cousin Sean is there too, and that he is wearing his fancy baseball uniform. Wouldn’t it be strange if Sean said that you and your friends can only have three chances to throw your rocks properly, and that you have to run around a big square on the beach, and that if somebody catches your rock in the air then you have to stop playing and go sit on a bench? Those are baseball rules, silly Sean! We know that Sean really likes baseball and that he is very good at it, but I’d have to pick him up and throw him into the lake if he tried to make you and your friends play by his rules. Sometimes people who really like science and think they’re good at it try to make other people read the Bible according to their sciencey rules. But why do that? (Sometimes I think those people should just go jump in the lake!) The Bible isn’t a science book – it’s a totally different thing with different kinds of answers. Sometimes it doesn’t have the kinds of answers to fit the questions we want to ask – like this one of yours about the age of the earth. It’s a very interesting question, but I think it’s one of those ones the Bible doesn’t completely answer for us. The Bible does tell us some other important things, though, like however old the earth is, it was God who made it. In fact, the Bible tells us that God is still making it, every second of every day.

Your last question is my favourite: “Did God get burned when he made the sun?” To answer this, I’d like to ask you a question: did you get burned when you drew that picture of a sun on your note to me? (Ha-ha, of course not, silly uncle Paul!) I think God is so big and so amazing and so powerful that he made our sun and all the other stars even more easily than you drew that picture for me.

Riley, I hope you will always ask hard questions because they are usually the most important ones. But now let me tell you something that even a lot of adults don’t understand: many of the most important questions don’t have easy answers. In fact, sometimes the really hard questions don’t have answers at all. Or, if they do have answers, sometimes we only learn them slowly, over the whole, long stretch of our lives. We just have to keep asking, and keep exploring, and try to be patient.
Whenever I get an important and difficult question in my head I ask myself if God has already answered it for us or not. That’s when I think about Jesus. Jesus is God showing us who he is in a way that we can (usually) understand. Jesus shows us that even though God is big and powerful enough to make everything, he still loves you and I and everybody else very much.

And I love you very much.
Always, 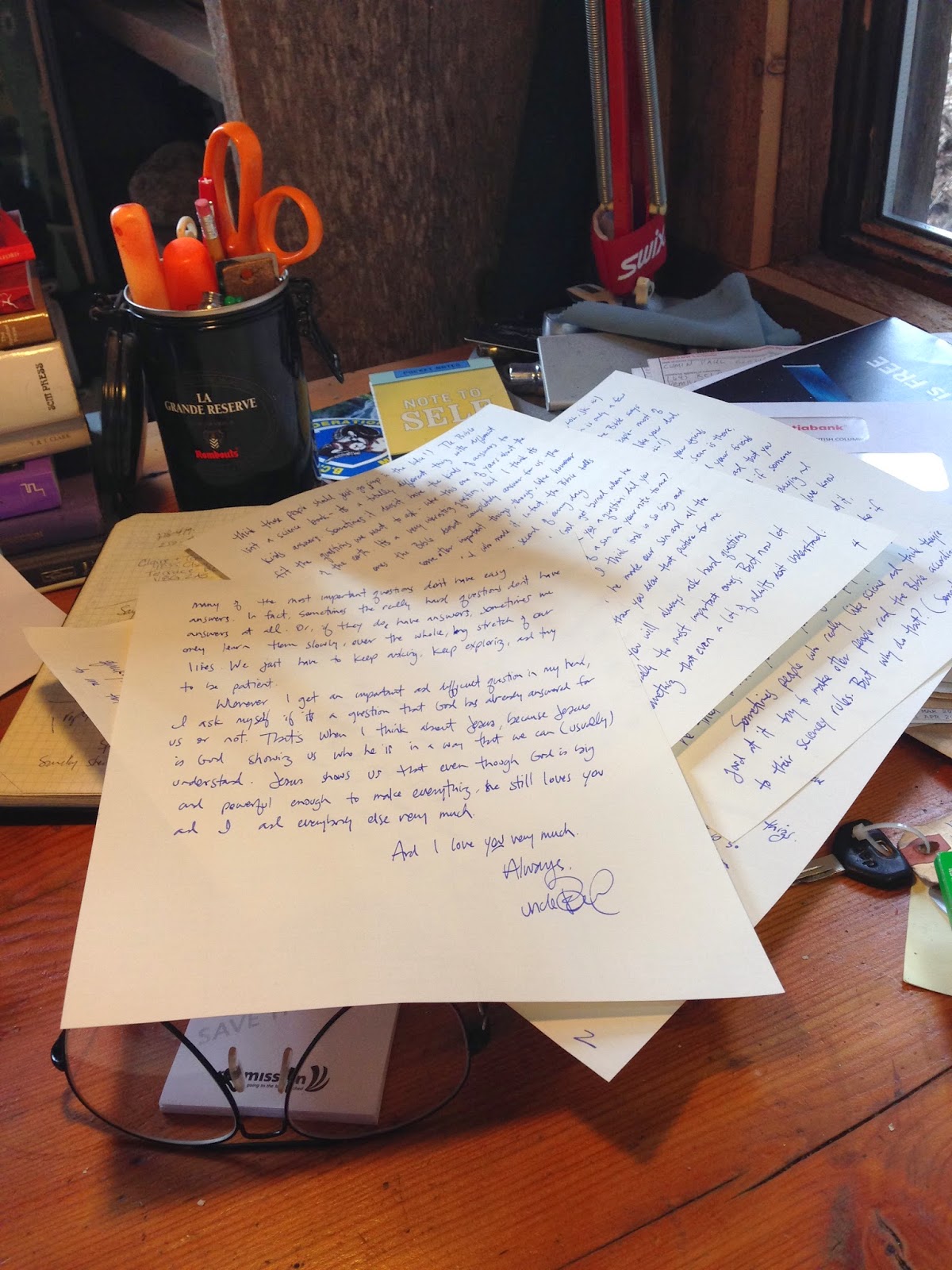 Eleven questions from a former friend

My friend moved away. But she's not willing to just let our thing drop. So she’s asked eleven questions ‘to get to know me better’. Okay, AJ. Thank-you. Here you go:

Accidental. It was midway through July, 1989 when I realized Grade 13 (an Ontario thing at the time) was optional. I was smoking tea rolled in Bible paper on a clandestine deck in the woods at the summer camp where I was working, and it was raining. I had an important lifeguard for a girlfriend at the time so I couldn’t give the decision much more than a couple hours attention. The ink ran on the paper but I mailed that college application the next day. In retrospect I don’t regret much about that summer but a little more thought about my choice of college might’ve served me better.

2. Where is one place you’ve been that you would tell others is “forgettable”?

3. Who was your favorite teacher growing up and why was that teacher so great?

Easiest question of the lot: Mrs. Walker, my Grade Three matriarch. Of all the forks in my road, the one she patrolled was almost certainly the most crucial.

At the moment it’s Corb Lund and the Hurtin’ Albertans.

5. What kinds of books do you read just for the heck of it?

6. If there was just one thing that you wish you could be a little better at, what would it be?

I’ve had a persistent prayer since I was maybe 18 based on a recurring theme in the Psalms; it’s about the way wisdom and humility only travel together. I don’t know why it first occurred to me to offer it, or why it keeps popping-up, but the request comes from somewhere either deep inside me or, more likely, from somewhere or someone beyond me. I’m pretty sure it’s true: I could be better at both.

7. What do you wish you knew when you were 16 that you know for sure now?

Here’s a bit from Jayber Crow by Wendell Berry:

“You have been given questions to which you cannot be given answers. You will have to live them out – perhaps a little at a time."

“And how long is that going to take?”

“That could be a long time.”

“I will tell you a further mystery,” he said. “It may take longer.”

8. How do you think you have the greatest influence in your work?

Probably in ways nearly opposite to what would be the most obvious answer to this question. Maybe it’s in whatever happens when I share a sandwich with my abrupt but gentle Ucwalmicwts tutor, or in that few seconds at my two o’clock appointment when I could’ve said something but didn’t, and just listened instead.

I expect Melanie and I will finally be finished with our adolescent jostling of wills and come again to naïve joy, holding hands.

My guess is it’ll be with one of my parents about the recent or imminent death of the other. In a way I’ve been preparing for that conversation for years, but I won’t be ready for it.

11. What eating establishment do I need to go to if money, distance, and time were of no concern.

Buy a slab of Chinook salmon off the docks in Tofino and cook it in butter over a camp stove in Long Beach mist.

Posted by Paul Cumin at 1:06 PM No comments: